What is The Sense of Community Index?

The Sense of Community Index-1 (SCI-1) is the measure most frequently used in the social sciences to gauge a sense of community. The SCI has been used in numerous studies within different cultures in North and South America, Asia, the Middle East, as well as many contexts (e.g., urban, suburban, rural, tribal, workplaces, schools, universities, recreational clubs, Internet communities). The SCI is based on a theory presented by McMillan and Chavis (1986) that a sense of community is a perception with an affective component. The theory identifies four elements of a sense of community: membership, influence, meeting needs, and a shared emotional connection. 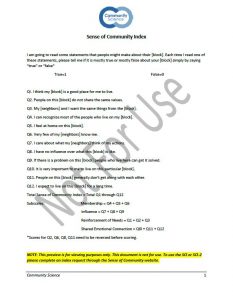 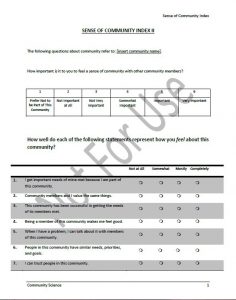 Prior studies have validated the SCI by demonstrating that it has been a strong predictor of behaviors (such as participation in voluntary associations) and health and community outcomes. The reliability of the overall 12-item scale has been adequate or better; however, some past studies have shown that the reliability of the four subscales has been inconsistent and sometimes low. The SCI has a true-false response set and only three items in each subscale that affects their reliability. In addition, since the original theory was developed, we have advanced in our understanding of a sense of community. Frequent changes to the items and response sets of the SCI by researchers made comparability among SCI results nearly impossible.

Obtaining Permission To Use the SCI-1 and SCI-2

Community Science is pleased to share these two indices with other organizations and individuals free of charge. The indices are available in multiple languages including French, Spanish, Japanese, and Portuguese, by request. However, no changes may be made to instruments, for use in either print or electronic form, without the written permission of Community Science. We are committed to maintaining the scientific integrity of these instruments. Substantive changes such as changing key words (such as “community”), response sets, or eliminating certain items will not be permitted under any circumstances.

We require that any person wanting to administer these instruments to complete our Request Form. The information provided in this form will help us address with you any changes to the instrument you are considering, provide any advice or resources that we have, and obtain your legal agreement regarding the uses of and changes to these instruments. We also ask users to participate in our benchmarking study so that we can help researchers and practitioners understand how their SCI-2 scores compare to those of comparable organization or settings. For more information about the instruments request process, contact us soc@communityscience.com.

Applications for accounts and or access to The Sense of Community Index are not automatically approved. Each application is reviewed by a human.

We do not respond to solicitations for affiliate marketing, blogging, SEO, link building, and advertising.

Applications for accounts and of access to The Sense of Community Index are not automatically approved. Each application is reviewed by a human.

We do not respond to solicitations for affiliate marketing, blogging, SEO, link building, and advertising.

How to use this site